Eric Ludwig has been working in the legal field since the mid 90s. Eric is an aggressive, well known and respected family law attorney who practices law in the Orange, Riverside, Los Angeles, and San Bernardino Counties. Eric has conducted over hundreds of family law trials, including domestic violence and contempt.

Eric has been married to his wife and law partner Michelle for 28 years. Together they have four children. Eric’s hobbies include boating, water and snow skiing, dirt bike riding, and all sports. 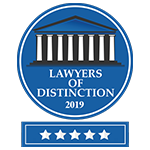 Send Us a Message

I have had many experiences with attorneys both personally and professionally, and Eric is by far and away one of the best. Not only have I received good legal advice and representation, the level of customer service I have received has been beyond my expectations. It is rare to find an attorney that is able…